AEA’s R44C is a replica of the most famous microphone in the world — the RCA 44BX ribbon. A staple in broadcast and recording studios when the first ribbon microphones were first introduced in 1930s, virtually every major recording artist has used RCA’s 44 ribbon technology.

In 2008, we released the A440 — a microphone at its core that is almost identical to the AEA R44CX, with the goal to set the standard for articulate musicality and quietness. Simply, the A440 is a phantom-powered version of the R44CX harnessing the JFET technology made popular in our RPQ2, RPQ500, and TRP2 preamps. 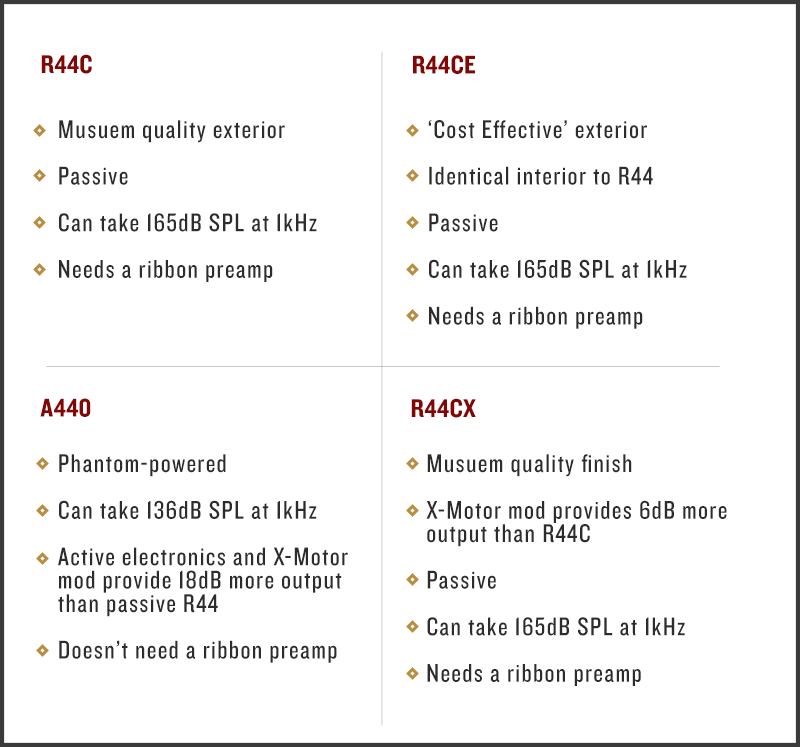 Though passive ribbon microphones have incredible warmth, they come with certain requirements in order to reach their full sonic potential. This centers around the preamplifier used with the microphone. Pairing any passive ribbon mic with a preamp that has a low input impedance can have a negative effect on the low-end, transient response and overall frequency response of the sound. Also, there can be intense noise issues on quiet sources.

Preamp gain for the R44C should be at least +60dB or higher and the preamp should have a high impedance of at least 1.2k ohms though we recommend an impedance as high as 10k ohms. To guarantee a consistent and full-range ribbon sound, we recommend AEA preamps like the RPQ2, RPQ500, and TRP2. However, preamps above a 5K ohm impedance found in many live soundboards are adequate, though these preamps may be a bit short on gain for quiet sources.

A high-impedance and high-gain preamp isn’t always the solution. In certain instances, long cable runs from a passive ribbon mic to a preamp can cause noise issues as well as impedance problems. On scoring stages, often times the preamps are in the recording space near the microphones and musicians minimizing this interference. This isn’t always a practical solution. 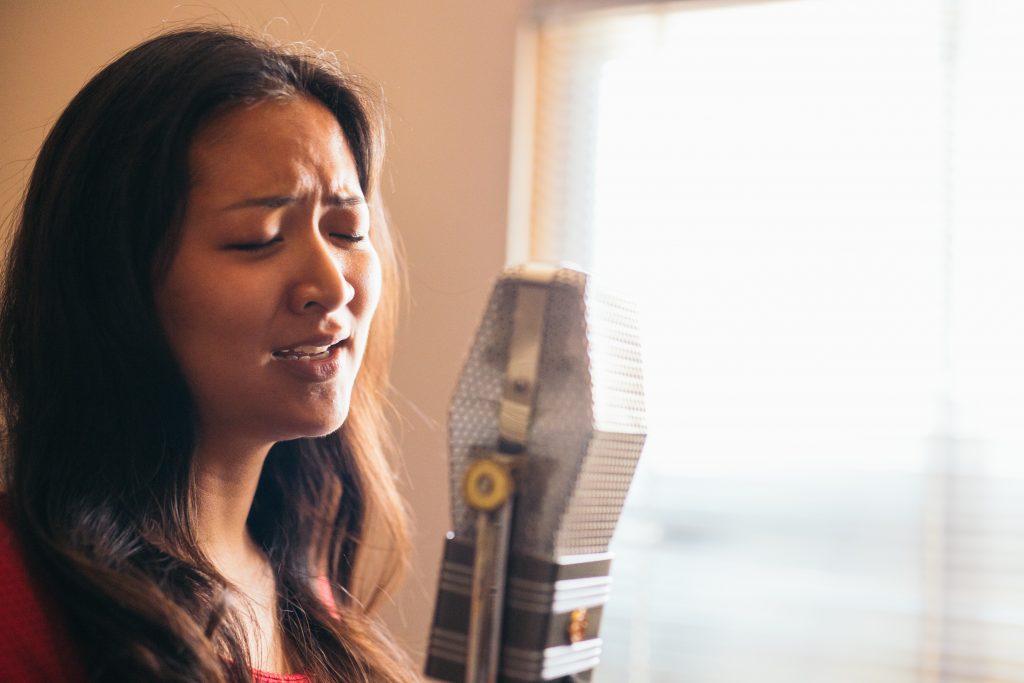 To overcome the preamp limitations of the R44, we created an active version — the AEA A440 — which includes the same JFET amplifier circuitry used in our preamps, allowing the microphone to be used with any modern preamp. The A440 requires 48-volt phantom power and provides an additional 18dB more output than the passive R44C. Again, the basic microphone sounds virtually the same.

We make several versions of the R44C. Two passive models, The R44C and R44CE differ only from the details of the outer case. Both mics sound the same. A hotrod adds an extra +6dB of output to either passive mic. This is called the ‘X’ transducer mod and it was designed for scoring and other applications demanding a wide dynamic range with the “classic 44” sound.

A Case For Quiet

Due to the internal electronics and ‘X’ transducers, the A440 has +18dB more output than the original R44C and a seriously low self-noise of only 9dB. The mic has active electronics, using a custom German-made Lehle transformer.

For quiet sources such as acapella vocals and solo finger-picked acoustic guitar, many ribbon mics have too much audible self-noise. Because of its high-output, the A440 alleviates this problem and allows you to use it on almost any source without noticeable noise. This is great for distant-miking applications in sound stages where the sources are very dynamic.

The R44C and A440 are also differentiated by their exteriors. The R44C’s transformer case is black, featuring a black and chrome ‘meatball’ badge. Brass thumb nuts adorn the A440 while the R44C uses the classic silver. The A440 wears a red badge, signifying the use of the ‘X’ transducer.

Interestingly, the body of the A440 microphone is a special classic RCA color called umber, which is kind of a reddish-brown color. This color is very difficult to reproduce and has to be hand-mixed. Why umber?

AEA’s first and original chief engineer, Dick Knoppow, who inspired Wes Dooley to start repairing RCA ribbon microphones, theorized that RCA chose the umber color due to users smoking in the studio. Paint it umber, they said. It was going to turn that color anyway over the years, RCA surmised.

The A440 represents the absolute best of everything we have learned from over 30 years experience with ribbon microphones. It was an extraordinary engineering effort to bring the latest technologies into the the old classic, while preserving its original sound and history.

5 Reasons To Upgrade to an Active Ribbon Microphone

The AEA R44C is an exact replica of the vintage RCA 44BX ribbon microphone, considered the most musical sounding microphone ever built and used on many of the most iconic recordings of the 20th century.

AEA Sessions: Mike Mayo – If You Could See Me Now