Recording groups with a single microphone

Starting in the 1930s and all the way through the 1950s, methods for capturing ensembles involved gathering several vocalists and instrumentalists around one mic — normally a ribbon. It was done this way for practical purposes from a technological, financial, and even sonic standpoint. Back then, microphones were expensive, tape machines were just starting to allow for more than one or two channels, and bands were used to performing in the same space all together at the same time.

Recording a live band had a purpose — to document a live performance for consumer playback. As technology evolved and recording studios grew, more and more instruments were recorded with more and more microphones. But the sound and feeling captured by the original method of single-mic recording was largely lost–until now.

Engineer John Cuniberti, known for his work with guitar virtuoso Joe Satriani, had recorded many timeless records in the modern way–miking up every instrumental individually, sometimes with multiple mics, blending them all together to create a unique mix. After years of recording with this method, John wanted to try engineering in a way he hadn’t before, with one microphone, harkening back to the style of old. With four simple goals in mind, his project aimed at capturing a band in one take, without edits, without overdubs but sound as balanced as a conventional multi-track recording.

On March 20th, 2016 John entered 25th Street Recording in Oakland, CA and did something he had never done before. John recorded an entire band with one stereo microphone, the AEA R88. Instead of adjusting the volume of each individual microphone for every instrument and voice, John physically moved the band’s amps, drums and voices around the one microphone to produce a balanced stereo image with depth and detail one would expect to hear in a conventional multi-track recording.

As John said, “This technique puts a lot of pressure on the band to not only perform well but balance themselves as you would during the mixing process. A lot of time is spent arranging the players in the room, adjusting their levels and getting them comfortable with their mix. To be honest, I wasn’t sure if it could be done with electric guitars and drums — but it worked great.”

A lot of time is spent arranging the players in the room, adjusting their levels and getting them comfortable with their mix.

Arranged Around One Mic

The AEA R88 stereo microphone is a true Blumlein recording system and houses two ribbon transducers with two separate outputs. The two ribbon elements are angled at 90 degrees and mounted in close proximity to each other along the vertical axis of the microphone. Sonically, the R88’s forte is its open and natural tonality. Coupled with the Blumlein technique, the mic provides an incredible sense of realism when miking everything from drum overheads, to rooms, orchestras, and full bands due to its outstanding low-end response, honest sound, and unmatched depth.

If the guitar needed to be panned to the left, the guitar amp would need to be positioned on the front left side of the microphone. If the bass or vocals needed to be in the center, they would need to be physically positioned directly in the center of the front or back quadrant of the microphone. Instead of planning which instrument would get which mic and hours spent mixing, John spent hours pre-planning setting up the position and spacing of the instruments and musicians in the room. 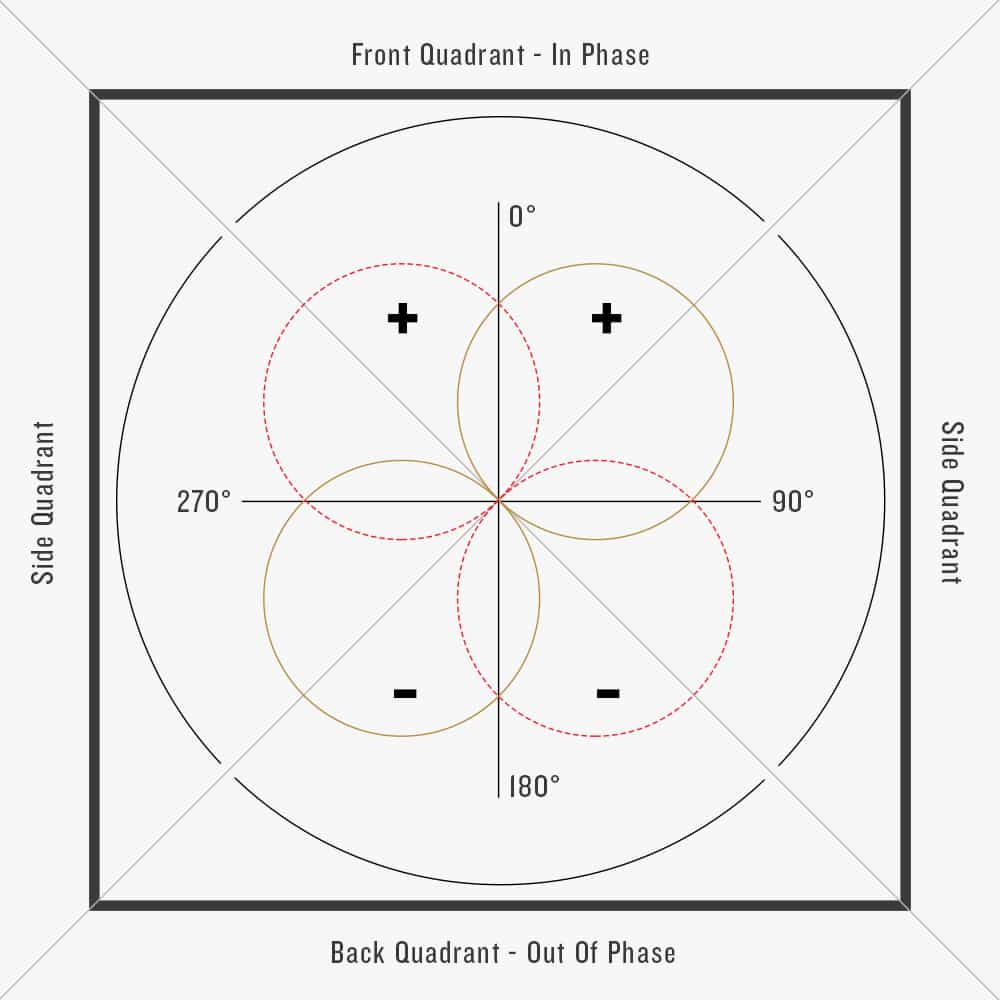 Sound directly entering a side quadrant may be out-of-phase since it is being picked up from both the positive and negative lobes.

Beware of the side quadrants

Instruments were not placed in the side quadrants of the mic because the sound would be captured by both the positive and negative lobe. This would result in a hollow, out-of-phase sound.

What You Hear Is What You Get

John’s success with his first session inspired him to refine the process of recording bands with a single mic culminating in a video series called OneMic — the minimalist recording series. To this date, John has recorded 11 different groups using this technique and many of them have asked him to record full albums using this same method. Filmed by Nathaniel Kohfield, the OneMic videos are truly a unique take on what can be done with a single microphone.

This means that the sound, balance, dynamics and stereo image is decided upon at the moment of creation, not in post production. The artist (band) is responsible for the final product.

According to John, “What makes this series so different from other live performance videos is that the artist is in complete control of his/her presentation. This means that the sound, balance, dynamics and stereo image is decided upon at the moment of creation, not in post production. The artist (band) is responsible for the final product. There is no editing of the audio or video. It’s as honest as it can be including imperfections.”

This organic presentation isn’t limited to “acoustic” music as seen with live classical and folk music. In this series, John Cuniberti records bands with electric guitars and drums that would normally require a multi-mic, multi-track approach. This is not the first time this has been done but this technique was quickly forsaken soon after the multi-track tape recorder was invented and with it a loss of a level of musical intimacy.

John proved with his series that you can do anything with the right band, the right room, the right engineer, and just a single mic. It’s a testament to John’s incredible sense of sonics and his courage to break the mold.